Chris Gayle, set to retire at the end of the tournament, then led the West Indies reply with 50 off 34 balls as the two-times champions reached 108-3 off just 13.4 overs.

Having won the toss and elected to field, West Indies made full use of overcast conditions as Thomas took four wickets for 27 runs, while captain Jason Holder (3-42) and the returning Andre Russell (2-4) completed the demolition job.

“It’s good to have a young quick like Oshane, we know he can be expensive at times but he’s a genuine wicket-taker,” Holder said after the match.

“That’s the gamble we need to take in one-dayers, with big scores going around.”

Pakistan’s batsmen have struggled with short deliveries and West Indies’ plan to pepper them with bouncers soon paid off.

Opener Imam-ul-Haq was caught behind down the leg side off fast bowler Sheldon Cottrel before Russell hit Fakhar Zaman on the helmet and the ball ricocheted onto the stumps.

Wahab Riaz struck 18 off 11 balls to help Pakistan breach the 100-run mark before he was cleaned up by Thomas.

“I was confident of running in and doing my job,” man-of-the-match Thomas said.

“Andre Russell started it for us, I just followed his footsteps today. Lot of guys tried to mix it up with short balls. We wanted to execute our plans well.”

The only concerns for the West Indies were Russell limping with a knee issue in the first innings, while Gayle appeared to have sustained a back injury.

After smashing two fours and a six in the 10th over, Gayle appeared to hold his back and limp to the other end for a single.

He looked increasingly edgy before holing out to point for Mohammad Amir’s third wicket of the match. 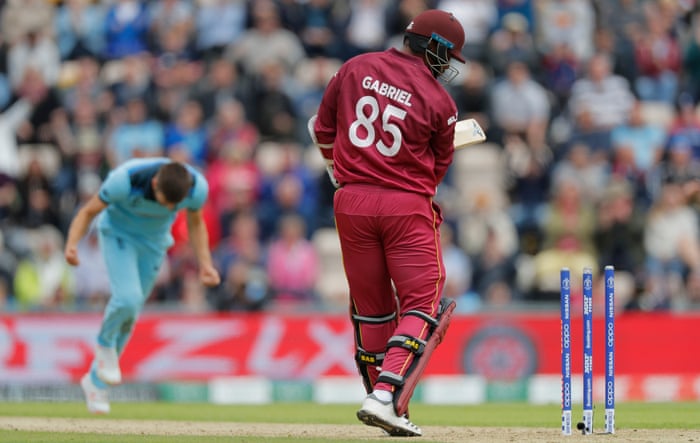 Pakistan 21.4-over innings was their lowest World Cup total since making 74 against England at Adelaide in 1992, the year Imran Khan’s team went on to lift their only 50-overs crown.

The in-form Zaman and Babar Azam got off to solid starts but were both dismissed for 22, exposing the middle order against the new ball and Pakistan never recovered.

The hammering was Pakistan’s 11th consecutive ODI defeat in matches where a result was achieved, following series losses to Australia and England.

“If you lose the toss and lose so many wickets early on, it’s tough to come back into the game,” Sarfaraz said.

“It was tricky for half an hour, but this is a good batting track, we didn’t bat well. I think we have to play positive cricket, didn’t do well today but hopefully we’ll bounce back.”

Welcome on 99cricket.com! we share latest updates about cricket

Bangladesh cricket captain Shakib was hanged for two years because of...

Sarfarz Ahmad and Kamran Akmal both are fit to play Pakistan’s...

Bangladesh has qualified for ICC under 19 Cricket World Cup final